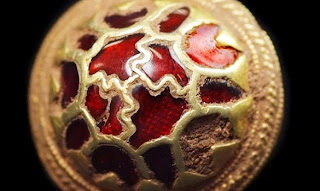 The largest hoard of Anglo-Saxon gold ever found has been unearthed on farmland in Staffordshire by a metal detector enthusiast, archaeologists revealed today.

Terry Herbert, 55, from Burntwood, came across the huge hoard as he searched a field near his home. The exact location of the discovery has not been disclosed but it is understood to be near the Lichfield border in South Staffordshire.

Experts said that the collection of more than 1,500 pieces, including helmets, sword pommels and sword hilts possibly looted on the field of battle 1,400 years by a victorious warlord, is unparalleled in size and may have belonged to Saxon royalty.

The hoard contains around 5kg of gold and 2.5kg of silver, far bigger than previous finds such as the Sutton Hoo burial site
Viking hoard of jewels and coins goes on show
A coroner is holding an inquest today at which he is expected officially to classify the find as treasure. After that a Treasure Valuation Committee made up of independent experts will put a market value on the hoard, a process expected to take more than a year, and local museums will be given the option to buy it.

The hoard is being held in secure storage at Birmingham Museum and Art Gallery, but some of items are to be displayed at the museum from tomorrow until October 13.