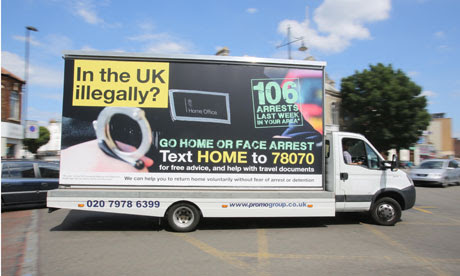 One of the Home Office's mobile vans offering help to illegal immigrants who want to leave the UK. Photograph: Rick Findler
Downing Street took the risk of escalating coalition tensions on Monday by declaring that a controversial campaign telling illegal immigrants to "go home" was working and could be extended nationwide.
A day after the Liberal Democrat business secretary, Vince Cable, called the campaign "stupid and offensive", a No 10 spokesman said David Cameron disagreed, adding that the posters and leaflets were attracting "a great deal of interest".
In a separate move, Lib Dem sources said that a Home Office plan to force visitors from certain Asian and African countries to pay a £3,000 bond before being allowed to visit the UK had not been agreed within the coalition. Reports saying the plan had been signed off prompted a particularly angry reaction from India.
Immigration is one of the issues on which the two coalition parties differ most sharply and the future of the illegal immigration advertising campaign and the bond policy are likely to be the subject of further arguments in coming weeks.
The campaign, which features the message: "In the UK illegally? Go home or face arrest", has been widely criticised because the blunt "go home" message is said to be reminiscent of racist graffiti common in the 1970s.
The Home Office has defended the £10,000 campaign covering six London boroughs, which involved leaflets and small posters being distributed and two advertising vans being driven around for a week. The department said it represented a constructive approach to the problem of illegal immigration.
The leaflets and posters include a number for illegal immigrants to text if they want to receive free advice and support with travel documentation to help them leave the UK.
On Sunday Cable condemned the campaign strongly. "It was stupid and offensive, and I think it is very unlikely that it will continue," he said.
But on Monday the prime minister's spokesman said: "This pilot that is currently running is about targeting [illegal immigrants] and it is working."
He said Cameron believed that encouraging illegal immigrants to leave the UK voluntarily was more cost-effective than arresting them and removing them by force.
The two vans carrying the posters around the London boroughs are no longer in service, but the leaflets are still in circulation. The Home Office is going to carry on monitoring responses to the text number for another three weeks.
Asked if the pilot would be extended, the spokesman said: "The Home Office has said this is already working. Clearly, we will want to look at that in more detail and see how we take this forward."
The Home Office would not give details of what evidence it had to show the campaign was succeeding. But a spokesman said that, given that an enforced removal costs on average £15,000, "if one individual were to take up the voluntary return scheme, that would cover the cost of the pilot compared to the cost of an enforced return".
By comparison, a voluntary return costs on average £739, he said.
No 10's enthusiasm for the campaign failed to impress the Lib Dems, who said they continued to find the adverts distasteful. A party source said Lib Dem ministers would need a lot of persuading that the campaign was having a beneficial effect and called claims that it only cost £10,000 misleading, because the row about the campaign's political undertones meant that it had now had as much publicity as a much more expensive advertising drive.
A Number 10 claim that the "Home Office team" approved the campaign also angered the Lib Dems, who said that Jeremy Browne, the Lib Dem minister in the Home Office, had not signed it off.
Angela Smith, a Labour Home Office spokeswoman, said that the adverts were "a cynical stunt and stupid politics to hide government failures on the basics".
Last week it was reported that the Home Office was going to go ahead with a plan later this year to force some visitors from India, Nigeria, Kenya, Sri Lanka, Pakistan and Bangladesh to pay a £3,000 bond for a visitor visa allowing them to stay in the UK for up to six months.
As this triggered protests abroad, sources close to Nick Clegg said that the £3,000 figure had not actually been agreed. Late on Monday afternoon the Home Office also issued a statement playing down reports that the policy had been finalised.
A spokesman said: "In the long run we're interested in a system of bonds that deters overstaying and recovers costs if a foreign national has used our public services.
"We're planning a pilot that focuses on overstayers and examines a couple of different ways of applying bonds. The pilot will apply to visitor visas, but if the scheme is successful we'd like to be able to apply it on an intelligence-led basis on any visa route and any country."
Earlier on Monday the Confederation of Indian Industry said it was "strongly" urging the British government to reject the £3,000 bond plan.
"This scheme is not in accordance to the spirit of 'special relationship' that India shares with the UK. It will shun the Indian tourist from visiting UK and also divert many others to more tourism friendly European countries," the confederation said.

HOME Office ad vans telling illegal immigrants to “go home or face arrest” may be rolled out nationwide after “hundreds” asked to quit the UK.
Downing Street yesterday insisted the blunt messages were a success — despite a bitter Coalition row over the controversial trials.
The PM’s official spokesman said: “The pilot is already working. There has been a good deal of interest.”
It costs the taxpayer £15,000 to carry out EACH enforced deportation. The average cost of a voluntary return is £739.
The month-long trial across six London boroughs — dubbed Operation Vaken — will run for another three weeks after “hundreds” of immigrants got in touch with the Home Office to say they are willing to go home, a Whitehall source claimed.
It is a major blow for senior Lib Dems Nick Clegg and Vince Cable, who have attacked the vans as “stupid and offensive”.
Mr Clegg’s spokesman said: “We would need a spectacular amount of convincing to roll this one out nationally”.
Meanwhile, a plan by Home Secretary Theresa May to force some high risk visitors to Britain to pay a £3,000 deposit to ensure they do not overstay their visas was slammed.
Business Secretary Vince Cable said: “It seems to send the wrong message that Britain is closed for business.” 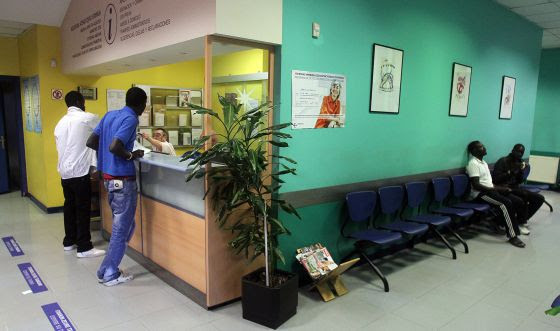