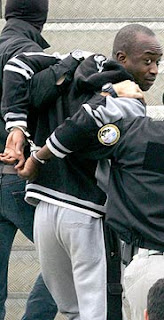 'Barbarian' defies court over torture and murder of Jew
Youssouf Fofana being taken from the Ivory Coast back to France
Charles Bremner in Paris
A self-proclaimed Muslim barbarian shouted his contempt for his judges yesterday at the start of his trial for the torture and murder of a young Jewish man.

Youssouf Fofana, 28, who led a loose-knit gang of youths from an immigrant housing estate, swaggered into court and shouted “Allah will conquer” as the court began hearing a case into a killing that horrified France and the world Jewish community in 2006.

Mr Fofana and most of his 26 alleged accomplices have admitted their roles in the kidnapping of Ilan Halimi, 23, an assistant in a Paris telephone shop, who was held for ransom for 24 days in the suburb of Bagneux.

Mr Fofana, whose parents came to France from Ivory Coast, denies killing the victim, who was tied up in a cellar and tortured with acid, cigarettes and knives. He died in an ambulance after Mr Fofana dumped him by a railway line and allegedly set him alight.

Related Links
Barbarian ‘killers’ stir spectre of anti-semitism
Police deny torture killing was anti-Semitic
The crime symbolised the casual and violent anti-Semitic culture among the young on the immigrant estates. It shocked France because many residents, including parents of gang members, were alleged to have been aware that Mr Halimi was being held. Some allegedly took turns in guarding the captive for a few euros. Half the defendants, mainly teenagers at the time, face charges of failing to render assistance or alert police.

The racially charged trial proceeded in camera because two of the accused were minors in 2006, including Emma, 19, of Iranian background, who is alleged to have lured Mr Halimi to his doom by visiting his shop and inviting him on a romantic date.

Ruth Halimi, the victim's mother, has accused the police of bungling the inquiry. She initially attacked the Government, including Nicolas Sarkozy, then the Interior Minister, for playing down its anti-Semitic aspect.

After thousands demonstrated, Mr Sarkozy promised Jewish leaders that everything would be done to bring all those involved to justice.

Mrs Halimi sat apparently praying in court as Mr Fofana, bearded and in a white tracksuit, grinned at her and jokingly told the judges that his name was “Arabs African revolt barbarian Salafist army”. Salafism is a fundamentalist movement espoused by many young immigrant radicals.

Mrs Halimi has been waging a campaign to keep the spotlight on the anti-Semitic motives behind the crime. Mr Fofana's accomplices are alleged to have said that he picked the victim because he was Jewish and “Jews have money and they stick together”.