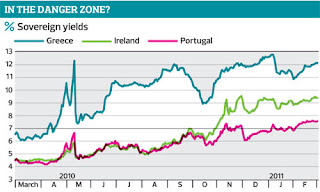 Portugal's cost of borrowing is now over 7% and analysts believe a bailout is just weeks away. But help from the EU may be delayed by a damaging row over closer economic co-operation

Ireland's election winner, Enda Kenny, jetted off to Helsinki this weekend to lobby for a reduction to the swingeing interest payments on its €85bn bailout, and for a more hands-off approach from Brussels on spending cuts.

Kenny, who is finalising a coalition that would make him Ireland's new prime minister, hopes that backing from the rightwing EU leaders' meeting in Finland, which Germany's Angela Merkel will be attending, will strengthen his hand at a critical summit in Brussels on Friday. But for the eurozone's leaders, Ireland's anger is just one symptom of a deeper crisis.

Portugal, long considered likely to be the next European country to reach crisis point, with its hefty debt burden and struggling economy, is seeing yields on its government bonds rise above 7% (see chart) – something that, as City consultancy Fathom points out, Greece and Ireland were only able to withstand for a couple of weeks before accepting a bailout.

Meanwhile, European Central Bank president Jean-Claude Trichet has ratcheted up the pressure by signalling that he is ready to raise interest rates, making life even harder for Portugal and the other "peripheral" economies. "What this has done is make it much more likely that Portugal is going to have to ask for finance," says David Owen of City firm Jefferies.

Yet with Portugal's plight becoming urgent, the EU remains locked in a row about who should pay the price for the boom and bust of the past decade.

Officially, Friday's summit is to discuss proposals for a "competitiveness pact". A controversial first draft of the pact was presented by German chancellor Angela Merkel and French president Nicolas Sarkozy last month; it would have allowed Europe's giant Financial Stability Facility to pour money into Portugal in exchange for eurozone member states signing up to much closer co-ordination of economic policy on issues including corporation tax, wage bargaining and the retirement age.

However, most other eurozone countries – including the Irish, who want to hang on to their ultra-competitive 12.5% corporation tax rate – reacted furiously to the Franco-German proposals, which they saw as threatening their sovereignty.

In an effort to pick up the pieces, a compromise proposal has been drawn up that will be discussed at this week's summit. But analysts remain concerned that it fails to tackle the real issues.

Away from the political top table, it is widely believed that there will have to be a restructuring of some of the debts of Greece, Ireland and Portugal – in other words, an acceptance that creditors, including Germany's banks, won't get all their money back.

"In the short term, the existential threat is the financial crisis. Dealing with that will have to involve reducing the debt burden on the three small states [Greece, Ireland and Portugal], and moving to recapitalise the banks in the periphery, and in the core," says Simon Tilford, chief economist at the Centre for European Reform.

Owen at Jefferies agrees that the banks in the wealthier "core" states of France and Germany are painfully exposed. "Some of the big holders of Portugal, Ireland and Greek paper are the banks, and the banks are in the core. Everyone is exposed to everyone else. That's why this problem is so intractable, and it's not in anyone's interests for anyone to default."

Europe's leaders are well aware of the scrutiny they face from the markets, so they are likely to cook up some kind of deal this week; but without solid proposals for a Portuguese bailout and a wider debt restructuring, the eurozone will be left stumbling towards its next crisis. "I think this could potentially be a very tricky month for the euro – it's a car crash waiting to happen," says Michael Derks of foreign exchange broker FxPro. "I think Portugal is weeks away, and I think Portugal will be the trigger."

Time and again since the onset of the credit crunch, European leaders have struggled to co-ordinate a convincing response to events, eventually being forced to act by financial markets. "It's Groundhog Day," says Owen.

There is another major summit on 24 March, but by then time will be running out for Portugal. Kenny may win a hint of concessions in Brussels next week, but wrangling over a few million euros with Dublin will be the least of the eurozone's worries.
Publicada por lusitânea em 2:35 AM