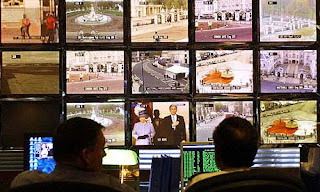 CCTV boom has failed to slash crime, say policeOwen Bowcott The Guardian, Tuesday May 6 2008 Article historyAbout this articleClose This article appeared in the Guardian on Tuesday May 06 2008 on p1 of the Top stories section. It was last updated at 12:05 on May 07 2008.
Police officers monitor CCTV screens in the control room at New Scotland Yard in London


Massive investment in CCTV cameras to prevent crime in the UK has failed to have a significant impact, despite billions of pounds spent on the new technology, a senior police officer piloting a new database has warned. Only 3% of street robberies in London were solved using CCTV images, despite the fact that Britain has more security cameras than any other country in Europe.