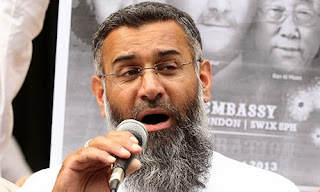 The corporation was accused of lending a platform to a "hateful extremist" when it featured Choudary alongside Lord Carlile in a discussion about radicalisation, following the conviction on Thursday of Rigby's killers, Michael Adebolajo and Michael Adebowale.

The debate triggered strong criticism on Twitter, including from the Independent columnist Owen Jones, who said: "Why do media keep giving a platform to Anjem Choudary, a hateful extremist who doesn't speak for British Muslims, other than to troll us?"

The Jewish Chronicle editor, Stephen Pollard, said: "Really, what is the point of giving an attention-seeking maniac like Choudary the one thing he wants – attention?"

The BBC has faced criticism in the past for inviting Choudary, a former leader of the proscribed group al-Muhajiroun, on to its topical discussion programmes.

Both Adebolajo, 29, and Adebowale, 22, had ties to al-Muhajiroun and were frequently seen at its demonstrations in London. Adebowale was seen at a al-Muhajiroun-linked demonstration outside the US embassy as recently as September 2012.

The Metropolitan police has said it monitors Choudary's public comments for potential breaches of the law.

When asked by the Today presenter John Humphrys whether he condemned the killings, Choudary said: "I think that to talk about condemnation or to talk about how we feel is not the most important question now, and I'm not going to go down that road. I think that what is important is to learn lessons from what has taken place.

"Whether you agree or disagree with what took place, you cannot predict the actions of one individual among a population of 60 million when the government is clearly at war in Muslim countries. I condemn those who have caused what has taken place on the streets of London, and I believe that the cause of this is David Cameron and his foreign policy."

Carlile, the government's former anti-terrorism adviser, told the programme: "Mr Choudary is a demagogue,. He doesn't like the United Kingdom. He doesn't believe in democracy. He wouldn't be allowed to say what he has said in almost any other country in the world, including Muslim countries.

Speaking at the EU summit in Brussels, the Prime Minister said the decision to have Choudray on the programme was a matter for the BBC but he added: "It is actually important that we make sure these views are properly examined and then properly trashed for all to see. He is a minority of a minority of a minority and should be treated as such."

Imran Awan, a criminologist and expert on terrorism and extremism, said: "My view is that it's almost like a continuous narrative – I'm not sure if it's to do with piquing their audience – but I think he fuels everything that is anti-British. In a way many people believe he is one of the key links to radicalising young people and, if he is one of those people, it is giving him the oxygen of publicity he so badly craves."

He added: "As a Muslim and as a criminologist the whole idea is trying to counter the extremist narrative and you can genuinely do that – but inviting people like him on the show all you do is give him a platform."

Referring to a separate story about two students who were forced to cover up clothing featuring a cartoon depiction of the prophet Muhammad, the broadcaster Samira Ahmed said on Twitter: "UK's free speech confusion: LSE apologises over clamping down on T-shirts followed by Anjem Choudary happily stirring thing ups few mins later."

A BBC spokeswoman said: "We have given great consideration to our reporting of the Woolwich murder and the subsequent trial, and carried a wide range of views from across the political and religious spectrums. We have a responsibility to both report on the story and try to shed light on why it happened."

"We believe it is important to reflect the fact that such opinions exist and feel that Choudary's comments may offer some insight into how this crime came about. His views were robustly challenged by both the presenter, John Humphrys, and by Lord Carlile, the government's former anti-terrorism adviser."