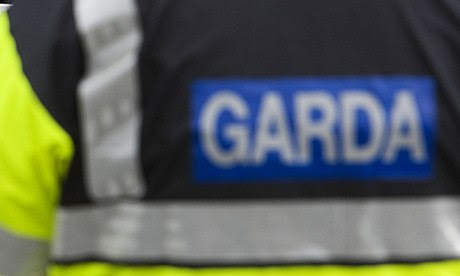 A garda officer. Photograph: Murdo Macleod for the Guardian
Irish police have said they have taken a blonde-haired child from a Roma family in Dublin.
The Garda Siochana raided a house in the Tallaght district of west Dublin on Monday afternoon where they found the child. It is understood they searched the house after receiving a tipoff from the public about the presence of the child in the house.
The development in Dublin comes after Monday's court appearance in Greece of a Roma couple who are charged with abducting a four-year-old blonde-haired child.
A garda spokesman said the couple in Tallaght told officers the child was their daughter. However the gardaí were not satisfied with the explanation or with the documents – particularly her birth certificate – that were produced by the family.
The gardaí used powers under the Child Care Act to remove the child from the family.
The girl, who is said to be seven years old, is understood to have been taken into care by the Health Service Executive. The HSE is believed to be seeking a court order to keep the child in care.
She can be kept in the care of the HSE for another month and the authorities must then decide either to hand the girl back to the family or seek a more permanent care order.
In the meantime, gardaí are planning to take DNA samples from the couple and from the girl to establish whether they are related.
Gardaí said on Tuesday afternoon that inquiries to establish the identity of the girl were continuing.
The couple in Greece claimed the girl's biological mother willingly gave her to them as a baby because she could not look after her. DNA tests have shown that the girl is not related to the couple.
The discovery of the girl, known as Maria, has prompted thousands of calls with leads from across the world including several from Ireland as authorities try to track down her real parents.