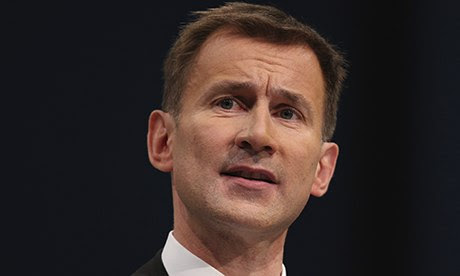 Jeremy Hunt, the health secretary. Photograph: Oli Scarff/Getty Images
The coalition has launched a fresh assault on so-called health tourists by saying short-term immigrants and foreign visitors should pay more than £500m a year towards the cost of their NHS care.
Jeremy Hunt, the health secretary, will present a new analysis suggesting temporary migrants are costing the NHS up to £2bn a year, and arguing this could be reduced by a quarter through a charge on new arrivals, better enforcement of the current rules and discouraging people from abusing the system.
The Department of Health commissioned the research after a political row erupted this year over how much health tourism costs the UK. Hunt was heavily criticised for claiming that it cost the taxpayer significantly more than £200m a year, while the NHS had only recorded £33m of charges to foreign nationals, of which £12m was written off.
Hunt will claim that the analysis by Creative Research is vindication of his figures, as MPs prepare to debate the new immigration bill. This will impose a £200 surcharge on temporary migrants coming to Britain for six to 12 months, paid when they arrive, to help cover the cost of their medical care. Creative Research said this would raise about £200m a year.
The report says the cost of immigrants who are already in Britain but not eligible for free treatment is £388m. Hunt is appointing a new NHS director of costs, Sir Keith Pearson, to help the health service get better at charging this group of immigrants for treatment.
The research estimates that the taxpayer will save between £70m and £300m because the government's tougher approach to discouraging health tourists will deter many trying to get free treatment in Britain.
"These independent reports prove this is a serious problem that the government was right to address," said Hunt. "We are confident our new measures will make the NHS fairer and more sustainable for the British families and taxpayers it was set up to serve."
The claims were challenged by Labour, and doctors raised concerns that GPs did not have the capacity to act as border guards monitoring patients' immigration status.
Dr Clare Gerada, chair of the Royal College of GPs, dismissed Hunt's initiative, saying GPs "must not be the Border Agency", adding: "You are more likely to be cared for by an immigrant than encounter a health tourist in the queue."
Dr Chaand Nagpaul, chair of the British Medical Association's GP committee, said there was "limited evidence to suggest that migrants or short-term visitors are consuming large parts of the NHS budget".
"The government's estimates are based on a number of assumptions that result in a figure significantly higher than previous estimates," he said. "GPs and other healthcare professionals do not have the capacity or the resources to administer an extended charging system that could require GPs to extensively vet every single patient when they register with a new practice.
"This would cause inconvenience to all patients and put additional strain on already overstretched GP services that are currently under pressure from rising patient demand and falling resources. It is doubtful that the expensive bureaucracy required to support an extended charging system would recoup enough money to cover the costs of setting it up in the first place."
Nagpaul also warned the government not to deter people from seeking treatment when they needed it. "Not only would this present a risk to the health of that individual, it could also prevent the NHS from identifying individuals with contagious diseases and result in further costs to the NHS should a patient's condition deteriorate to the extent they require more expensive emergency treatment later on," he said.
A Labour source claimed the figures produced by the government were already unravelling.
The report itself contains a note of caution, saying all of its estimates are "subject to varying degrees of uncertainty, relating to the numbers of people and their behaviour".
"The estimates for health tourism, as for any unlawful activity, are impossible to estimate with confidence and are a structured judgment," it says. "The estimates for chargeability are also uncertain because of the complexity of the rules. The estimates are presented as the best that can be made at present, recognising that they are based on incomplete data, sometimes of varying quality, and a large number of assumptions. The analysis is intended to inform policy development around visitor and migrant access to NHS, alongside the DH consultation and work with the NHS."
Andy Burnham, the shadow health secretary, said his party was in favour of charging people with no entitlement to NHS treatment, but the government-backed report appeared to be "more about spin than substance".
"The government's own report undermines their headline-grabbing figures, admitting they are based on old and incomplete data," he said. "Instead of grandstanding, the government need to focus on delivering practical changes. Labour would not support changes that make doctors and nurses surrogate immigration officials."
A spokesman for Hunt said the analysis was based on two separate reports from independent expert market research consultancies – Prederi and Creative Research – which were reviewed by three independent peer reviewers with expertise in modelling and health research.