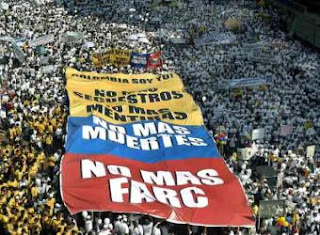 
The guerrilla group Farc has long been suspected of running the Colombian cocaine industry. But how does it move the drug so readily out of the country? In a special investigation, John Carlin in Venezuela reports on the remarkable collusion between Colombia's rebels and its neighbour's armed forces


Some fighters desert from the Revolutionary Armed Forces of Colombia (Farc) because they feel betrayed by the leadership, demoralised by a sense that the socialist ideals that first informed the guerrilla group have been replaced by the savage capitalism of drug trafficking. Others leave to be with their families. Still others leave because they begin to think that, if they do not, they will die. Such is the case of Rafael, who deserted last September after 18 months operating in a Farc base inside Venezuela, with which Colombia shares a long border.
Publicada por lusitânea em 11:13 AM