Female reveller is brutally beaten by another woman who accuses her of throwing a SANDWICH in horrifying video of fight on train after Notting Hill Carnival
Footage shows a woman and a man being brutally attacked after they were accused of throwing a sandwich at a rail passenger. The incident happened on a train travelling from London to Birmingham as revellers were returning home from Notting Hill Carnival. In a video published to Facebook , a woman approached the pair asking if they had chucked a food at her. After they denied her claims, she took off her wig and repeatedly punched one of the victims in the head. 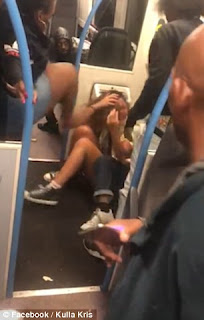