Chicago's deadly summer: guns, gangs and the legacy of racial inequality
In a city torn by gun violence, many say the crisis is inseparable from a history of segregation and systemic neglect
Worse than a war zone’
Advertisement

Census analysis shows the population of North Lawndale and neighbouring East Garfield Park is 89% black, and has fallen to 55,000, 70% lower than in 1960, while almost half of households live below the poverty line.

Five miles from the glittering glass and steel of Chicago’s waterside downtown, the people who stay are hanging on in a city segregated on colour and economic lines.

Amongst activists and church leaders there is scathing criticism for Rahm Emanuel, the Chicago mayor of seven years, who was once Barack Obama’s White House chief of staff. Common themes are a preoccupation with showy downtown developments, and using tax dollars for pet projects while ruined neighbourhoods are ignored. 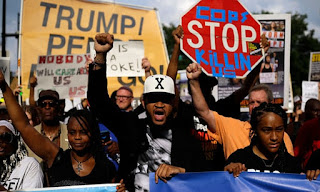