Facing jail: Illegal immigrant couple who falsely posed as Grenfell victims then lived in a luxury hotel for eight months racking up £11,000 food bill despite moaning about quality of the menu 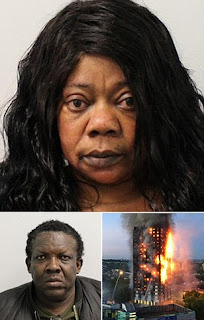 Illegal immigrants lived in luxury hotel after falsely claiming they were Grenfell Tower
Tommy Brooks, 51, (above) and Elaine Douglas, 51, (top) were unmasked as fraudsters after giving an incorrect flat number in the West London block where 72 people died last June (inset). But before their arrests they racked up bills for £104,000 for accommodation alone and Douglas ran up a food bill of £11,000 while also complaining about the quality of the menu. The couple came to the UK from Jamaica in 2002 and were booked on return flights but did not show up and disappeared. They turned up at the Grenfell support centre claiming they had narrowly escaped death from their flat on the 19th floor of the block. The couple were housed for 243 at the Radisson Blu Edwardian Hotel, in Kensington, and issued with credit cards and Oyster cards so they could travel around London for free. But they were caught out when they gave investigators the number of their flat - not realising it was on a different floor. Brooks and Douglas, both of no fixed address, both admitted one charge of fraud at Isleworth Crown Court today.