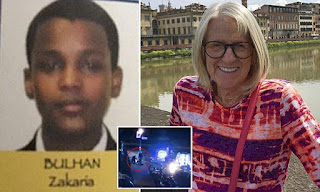 PICTURED: The moment police bundled crazed Norwegian-Somali knife attacker to the ground after he stabbed US woman to death in Russell Square. Police claim attack was 'spontaneous and random'
London’s Russell Square ‘terror’ knife attack leaves woman dead and five injured
Armed officers take to the streets as the Met promise an increased presence in London
'Nice to wake up to the news': Vile ISIS supporters celebrate Russell Square bloodbath in 'centre of Christendom'
'They want loads of attacks in England, Germany and France at the same time': Former jihadi reveals how terrorists plan to attack Europe
The American victim, in her 60s, died in a pool of blood as she was cradled by a family of Spanish tourists, as the 19-year-old stabbed pedestrians in the back, side and arms who were left 'screaming and covered in blood'. Police were called at 10.30pm last night and Chanel Britton, 19, of Barnsley, captured the moment up to eight officers searched him after being Tasered to the ground. The teenager, a Norwegian of Somali origin, was arrested on suspicion of murder and he spent the night in hospital before being moved to a south London police station. The woman was pronounced dead at the scene and two women and three men - who were British, American, Israeli and Australian - were taken to hospital. Three have since been discharged. Britain's top anti-terror officer Mark Rowley said they have now interviewed the suspect, spoken to his family, and searched his London home.