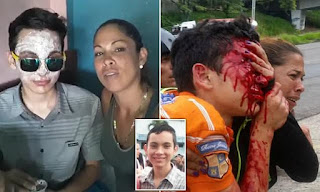 WARNING GRAPHIC CONTENT: Rufo Chacon, 16 (left, recovering with mother Adriana, right immediately after he was shot, and inset before he was shot), was shot in the face during protests in Venezuela two weeks ago and doctors have now revealed that he lost both of his eyes. Medics said that, of 52 pieces of rubber buckshot that hit his face, 16 of them entered his eyes, leaving them with little choice but to remove them both. Chacon has spoken out about adjusting to his new reality, saying that he has started to forget what colours look like. Two police officers have been arrested and charged with attempted murder over the shooting.