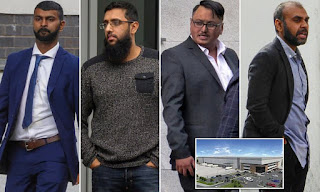 Mohammed Miah (right), 43, Jaleel Khan (centre left), 30, Soyfur Rahman (centre right), 38 and Mohammed Aamar (left), 28, have been jailed for more than 11 years after stealing the gadgets from a UPS distribution centre where they worked. Employed as security guards at the warehouse in Birch Coppice Business Park (inset), Dordon, Warkwickshire, they used their positions to steal hundreds of expensive phones. Warwick Crown Court heard that police found an 'Aladdin's cave' of hundreds of stolen items which they hid in their homes, vans and storage units. The brazen group drove out the warehouse with boxes of phones before boasting about how easy it was on social media.