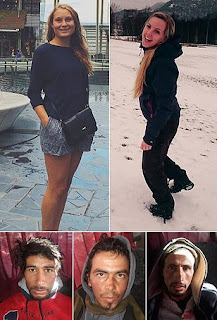 BEHEADED by ISIS: Murders of two Scandinavian women in Morocco were terrorism, Denmark suspects, as it's confirmed one of them was decapitated on video
BEHEADED 'by ISIS': Scandinavian women murdered in Morocco were victims of terrorism,
Maren Ueland (top left), 28, from Norway, and Louisa Vesterager Jespersen (top right), 24, from Denmark, were found dead near the village of Imlil in Morocco's High Atlas mountains on Monday. At least one of the suspected killers is an 'extremist', Moroccan authorities have confirmed, prompting fears that the gruesome double murder was an act of terror. This morning, the PET Danish intelligence service said it had authenticated an online video showing the murder of one of the women and that the killings can be connected to ISIS. A Moroccan police source said today that three fugitive suspects had been arrested in Marrakesh after an intensive manhunt and after local media had released images of three suspects (bottom).

UP NEXTIncredible video of the 10 most stunning abandoned locations in the world
TWO Scandinavian backpackers were butchered in Morocco by suspected ISIS terrorists in a horrific beheading video after they were stalked up a mountain.

Louisa Vesterager Jespersen, 24, and Maren Ueland, 28, were knifed and decapitated on a hiking holiday after their suspected killers were seen lying in wait just 600 yards away.


Louisa Jespersen, pictured, and her friend Maren Ueland were murdered while camping in a remote mountainous area of Morocco


This morning Danish authorities confirmed that a horrifying video circulating on social media of one of the women being murdered is authentic.

Police have arrested four men, as the Rabat public prosecutor's office confirmed that at least one of the group is affiliated to a terrorist group.

The chilling clip shows a woman screaming while a man cuts her neck with what appears to be a kitchen knife.

During the video, the perpetrators are heard linking the atrocity to the Western bombings in Syria, crying: "This is for Syria, here are the heads of your Gods."