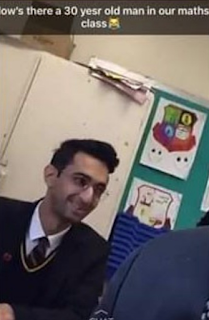 The asylum seeker from the Middle East spent six weeks as a Year 11 pupil at Stoke High School in Ipswich, Suffolk, until pupils and parents threatened a boycott. Immigration service sources today confirmed that the 6ft1in pupil who spoke broken English was assessed as being aged over 18 in an investigation ordered by the Home Office. He is now being treated an adult asylum seeker, meaning that he faces being thrown out of the UK if his claim is refused. The man was suspended this month after a pupil posted a picture of him in uniform in a classroom on Snapchat with a message saying: 'How's there a 30-year-old man in our maths class?' His classmates also discovered what appeared to be old pictures of him on Facebook, showing him with a full beard, a hairy chest and swigging a beer. The asylum seeker's younger brother was also taken out of class but Home Office sources told MailOnline this month they are sure he is a child.

HOW COULD THEY BE SO STUPID? First picture of ‘adult asylum seeker who posed as a 15-year-old schoolboy to sit GCSEs’
The alleged asylum seeker from the Middle East who claimed to be a 15-year-old boy spent six weeks as a Year 11 pupil at Stoke High School in Ipswich, Suffolk