'I hate white people': What US man screaming 'Allahu Akbar' told police after he was arrested for randomly shooting dead three people in California 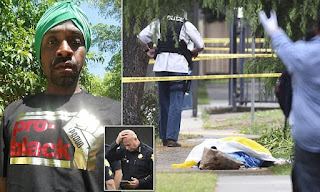 Fresno shooting 'solely based on race,' police say
A man shot and killed three people on the streets of downtown Fresno on Tuesday, shouting 'God is great' in Arabic during at least one of the slayings and later telling police that he hates white people, authorities said. Kori Ali Muhammad, 39, was arrested shortly after the rampage, whose victims were all white, police said. He also was wanted in connection with another killing days earlier, in which a security guard was gunned down at a Fresno motel after responding to a disturbance.