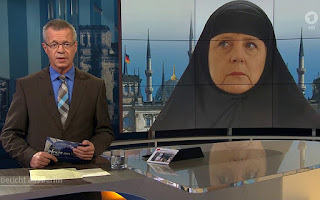 Slavery under Tughlaq dynasty
Enslaving non-Muslims was a standard practice during Delhi Sultanate, but it reached a new high during the Tughlaq dynasty.[65] Each military campaign and raid on non-Muslim kingdoms yielded loot and seizure of slaves. Additionally, the Sultans patronized a market (al-nakhkhās[66]) for trade of both foreign and Indian slaves.[67] This market flourished under the reign of all Sultans of Tughlaq dynasty, particularly Ghiyasuddin Tughlaq, Muhammad Tughlaq and Firoz Tughlaq.[65][68] Both Ibn Battuta's memoir and Shihab al-Din ibn Fadlallah al-'Umari texts recorded a flourishing market of non-Muslim slaves in Delhi. Al-'Umari wrote, for example,

The Sultan never ceases to show the greatest zeal in making war upon the infidels. Everyday thousands of slaves are sold at very low price, so great is the number of prisoners (from attacks on neighboring kingdoms).

— Shihabuddin al-Umari, Masalik-ul- Absar[69]
Ibn Battuta praises the gift of slaves he received from the Tughlaq Sultan.[70] His memoir record that he fathered a child each with two slave girls, one from Greece and one he purchased during his stay in Delhi Sultanate. This was in addition to the daughter he fathered by marrying a Muslim woman in India.[71] Ibn Battuta also records that Muhammad Tughlaq sent along with his emissaries, both slave boys and slave girls as gifts to other countries such as China.[72]