A 17-year-old boy has been arrested on suspicion of an arson attack on a historic church, police said.
ADVERTISING
Fire crews battled the blaze at the 19th century All Saints Church in Fleet, Hampshire, for more than three hours.
The teenager, from Fleet, was arrested by Hampshire Police last night in connection with the blaze which destroyed the roof of the church, throwing wedding plans into disarray for many couples due to tie the knot in the coming weeks.

The blaze which destroyed the roof of All Saints Church
Vicar Mark Hayton urged people to pray for those whose wedding plans had been ruined.
He added: "The destruction of a church is a cause of deep sorrow, not just for churchgoers but for the whole community.
"We are in profound shock but thankful that no-one was hurt in the fire."
The church has set up a page on its website for people to add their memories of the building as well as hopes and prayers for the future. 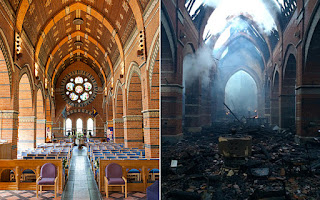 The inside of All Saints Church before and after the fire (Bill Skyes)
Built in 1862, All Saints was designed by the architect William Burges who also worked on Saint Fin Barre's Cathedral in Cork and the Tower House in London.
The fire officer in charge of the incident, Brian Rudman, said: "Crews have worked hard in arduous conditions to bring the fire under control.
"Unfortunately the roof of the church has been completely destroyed by the fire but the main structure and brick work remains intact and there is every hope that this church can be rebuilt in the future."
A Hampshire Police spokesman said: "A 17-year-old boy from Fleet has been arrested on suspicion of arson and is currently helping police with their inquiries."