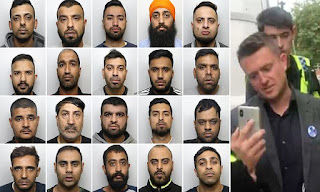 Huddersfield Asian sex gang jailed for more than 200 years
The abuse, which centred in Huddersfield, West Yorkshire, took place 'in cars, car parks, houses, a snooker centre, a takeaway, a park and other places'. He has since been freed and faces another hearing. The men referred to each other using a series of nicknames which were also used as their monikers during the trials. They included ‘Beastie’, ‘Dracula’ and ‘Nurse’. The pattern of large-scale exploitation of mainly white girls by groups of men of mainly Pakistani heritage uncovered by West Yorkshire Police in Huddersfield mirrors what has happened in a number of other towns including Rotherham, Rochdale and Telford. The Leeds trials attracted protests by right wing groups and EDL founder Tommy Robinson (right), who was jailed for contempt for endangering one of the cases with social media posts.