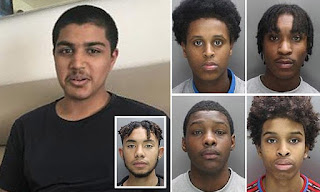 Five teenagers who 'tortured' a 15-year-old boy to death in an alleyway behind his home can be named for the first time after they were handed life sentences today. Kai Fisher-Dixon (bottom left), Abdulqaliq Mohamed, Tremayne Gray, Shuayb Mahomud and Omarion Stephens (clockwise from top left) stabbed Jacob Abraham (pictured left) to death on December 7 last year. Hours before the fatal attack on Hurst Drive in Waltham Cross, Hertfordshire, Jacob had been helping his mum make sandwiches for homeless people. He was found dying from multiple stab wounds by his brother Isaac, who had gone out to look for him when he had not returned.