Hottest night of the year sparks 12 hours of violent flares in London: Police locked in tense stand offs with gangs of teenagers as four youths are knifed and five police are injured 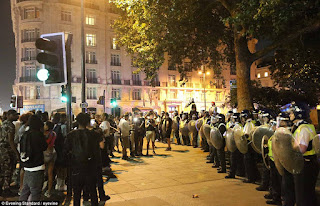 London police officer stabbed after Hyde Park water fight descends into chaos
Five people - including a police officer - were stabbed last night during a night of violence in three different parts of London yesterday evening. A Metropolitan Police officer and two members of the public were knifed and four other PCs were injured after a water fight and party in Hyde Park (pictured centre) spiralled out of control in the city's worst bout of violence since the 2011 riots. Meanwhile two 16-year-old boys were stabbed at a separate water fight in Burgess Park, Southwark, while police attempting to shut down an illegal block party in Stamford Hill, Hackney, had bottles thrown at them. Grainy footage (right) has emerged of a young man, who has not been named, apparently being set upon by three others with a machete in the middle of a busy road near Hyde Park.