Yamnaya people dominated Europe from between 5,000 and 4,000 years ago
They had nutritionally rich diets and were tall, muscular and skilled horse riders
It is believed they exploited a continent recovering from disease and death
They spread rapidly, adapting and massacring their way throughout Europe
Slaughtered Neolithic men in prehistoric genocide to ensure their DNA survived
They made their way to Britain and within a few generations there was no remains of the previous inhabitants who built Stonehenge in the genetic record 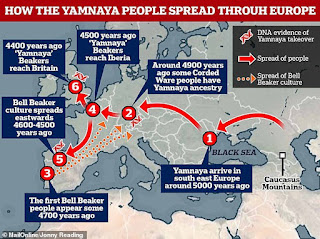