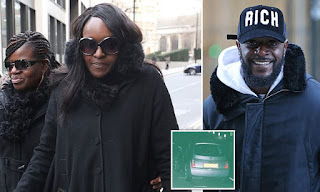 The 35-year-old, who has been kicked out of the Labour Party, faced fresh calls to quit today - but unless she agrees to do so will continue to represent her constituents and draw her £77,000 taxpayer-funded salary while she sits in prison. The Peterborough MP became the first sitting female MP to be jailed after lying to investigators when her car (inset) was caught doing 41mph in a 30mph zone in July 2017. The judge told her: 'It is not one law for those in a position of responsibility and power and another for those that are not.' Her brother Festus (right) was also jailed.